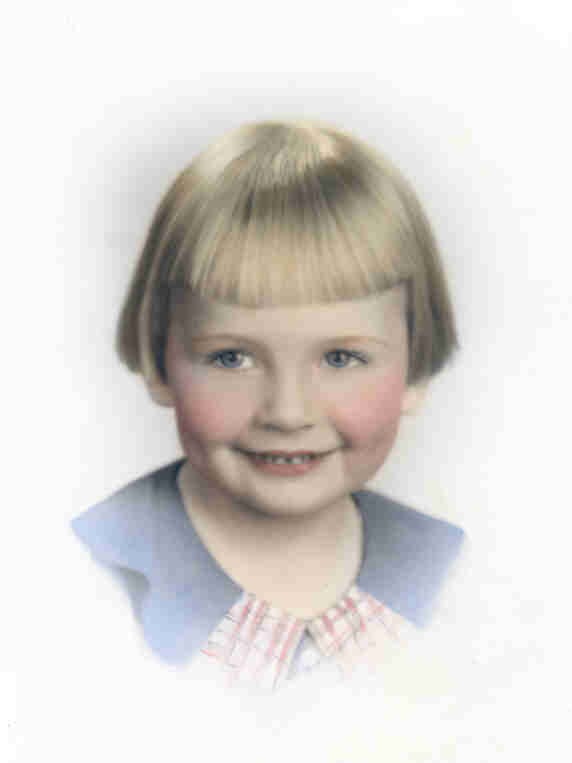 This story was written in 2001 as Stephanie Ryan & I worked together on her family history, I'm sharing here with her permission. I'd been doing research for about 6 years, and this was my first time moving away from my own family and working on someone else's line.... what fun we had ....

My search began with a single document. A birth certificate, issued in 1933, Alameda County, California. Father’s name, James Ingle; age 37; occupation, car salesman; birthplace, Osawatamie, Kansas.  Never one to pass up a challenge, this was my first opportunity to put my genealogy research skills to the test – to search outside of my own family lines.  My friend Steff grew up in Livermore, raised by her mother and stepfather. She’d always known there was another father, but the one time she asked about him, her mother cried and refused to talk. Fast-forward 50+ years to the birth certificate. Her mother and stepfather had both passed away; it was time to search.

Once I had the information from the birth certificate, my first stop was the Social Security Death Index (SSDI). I hit pay dirt with the first query. There was only one James Ingle who matched name, date and place of birth. His benefits were paid out in Kansas. I e-mailed my findings, and Steff said she’d get back to me. She wasn’t sure what she wanted to do, and busy with my own family life and work, I didn’t push. About six months later, I sent for the Social Security application for James Ingle. It arrived a month later. Steff had sent for it at the same time and when we reconnected we laughed at the coincidence.

The Social Security application was filed in the 1940s. It listed James’ date of birth, October 1895, his parents names and his place of birth. Armed with this information I surfed the net, using the Kansas GenWeb site. I immediately found a cemetery listing in Miami County, Kansas matching the name and date of birth. It was for James, his wife and an adult son. So far so good, everything matched the SSDI listings.

Now we were ready for a trip to the archives – census research. Again immediate success – family groups for James as a child with his parents and siblings all in Kansas, the right place at the right time. This was a blessing for our research. We also found James with a wife and sons. What fun to take a non-genealogist to the archives, teach her how to use the microfilm and find more than we imagined was available. Steff, a quick learner, was hooked.

Armed with this new information, I surfed back to the Miami County site, and requested a records check for the obituaries for James, his wife, and son. For a few dollars donation and a wait of only two weeks, I received them in the mail.

The obituaries were a gold mine of information. They listed family members, both living and dead, marriage dates, occupations and affiliations. From these we determined that James was married to his 2nd wife when he died, and was apparently divorced when he was in California in 1933. One item stood out – James Ingle had run for sheriff in 1944 and had served for several years. I again e-mailed the Miami County genealogy society and asked them to search for any newspaper articles about the election and perhaps a photograph of James. I sent donation, and awaited their response.

A few weeks later, an envelope from Miami County arrived. The handwritten address tells me this is personal mail – oh, so very personal, not the pre-stamped, computerized envelopes we receive every day. I ripped that envelope open so quickly; I was so excited. Enclosed were three articles about the race for sheriff in 1944. The very first article had a photograph of James! I could scarcely believe it; there he was staring back at me from the newspaper of Paola, Kansas. GOOSEBUMPS, hair standing up, goosebumps, genetics, DNA, all there looking at James Ingle. There is little doubt he’s Steff’s father. I could see it clearly. Steff has a lovely set of dimples and when we began this search only a few months before, I had asked Steff if her mother had dimples. She said no, she wasn’t sure where they came from. Well, now, I was very sure. Right there in the photo – James had dimples. A couple of days later, there was an e-mail from Steff. She’d shown the clipping to a friend, didn’t tell her why and asked her to look at the photo. Her friend said the same thing I had – this man looked just like her, dimples and all. 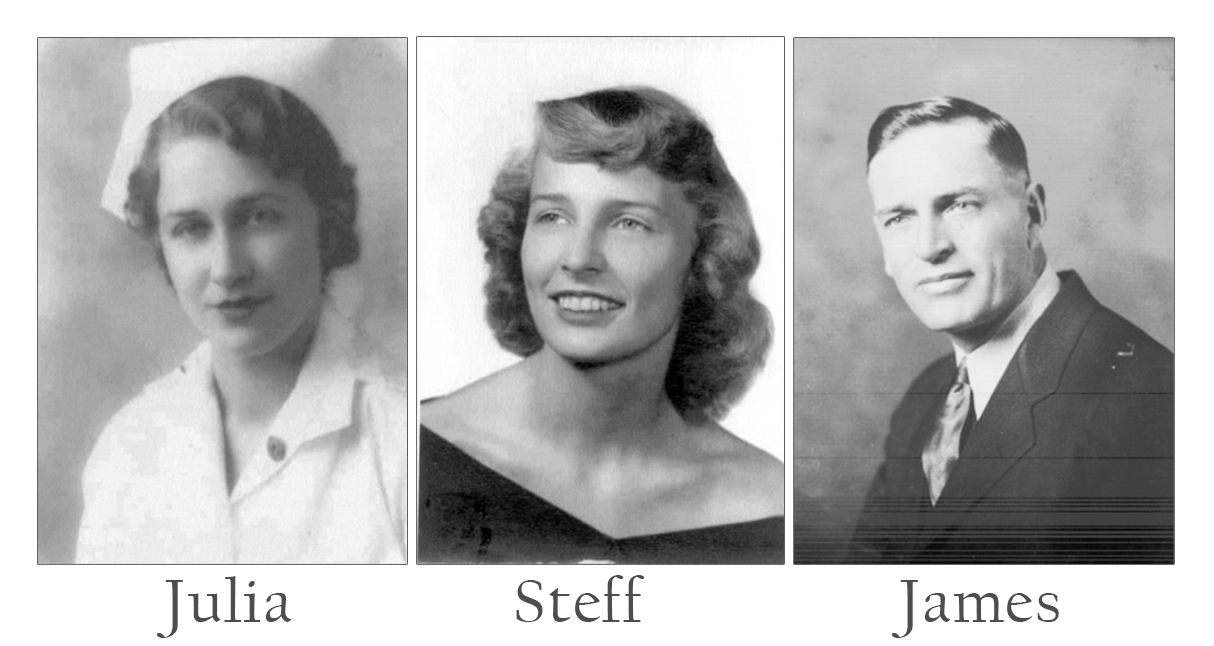 October 2000, I received e-mail from a relative. I’d taken a name from a World Family Tree entry, and e-mail’d away! The cousin, by marriage, had family information matching all we’d found in the census reports. Another week later she’s sharing family history documents completed 30 years ago: names, dates, places, family reunion lists, and the like. Somewhere other family members had done some cursory work, leading our search back several generations, and giving us directions in which to look for more ancestors. A few weeks later, another e-mail from a 2nd cousin, another line of the family. Turns out she and her sister-in-law had been doing research for a year or so, and their families hadn’t ever connected with the line we were researching.

I was able to take the documents I’d received from one cousin and send them to the others, as well as all of our census work. They sent their work, and photos. Photos of great-grandparents. . . .their farm, their 50th anniversary party. What a treasure. It felt so wonderful to be able to assist in putting these lines together, not to mention gathering all of the information for Steff’s own files. Somehow our e-mails made their way to other family members, including some first cousins who are in their late 70s and 80s. There was some skepticism with our story, and yet they were more than happy to share some memories of their Uncle James, Steff’s father. They described his home behind the county jail, when he was the sheriff, taking dinners prepared by his wife to the prisoners in lockup, the smells of their grandmother’s baking, and the rural farm life.

Steff provided me with a photo of her mother as a young woman, and her own high school photo. I took both of these, and a small photo from a newspaper article of her father, and with a bit of work on the computer, created a group photo of all three. Looking at them together, the resemblance to her father was striking. I e-mailed this to all the e-mail cousins, and received the same responses I’d felt the first time I saw it – "Wow! No doubt about those genetics!" We were contacted via e-mail again, by another first cousin living here in California. He was so warm and inviting in his e-mail, what a wonderful response.

The e-mails all led to Christmas morning, when the new California cousin called to say "Merry Christmas" to his new cousin, and "Welcome to the family." Cousin Jay Ingle and his wife Loretta were traveling through Stockton in February. We arranged a meeting for brunch, and had a wonderful visit. Two hours later, a roll of film and promises to meet again. Jay really was the catalyst for finding and contacting some of the cousins. I don’t know that we would have gone any further if he hadn’t stepped in and helped. Steff said she was fine with the information we’d found, and happy to have some new cousins. Little did we know there were more relatives awaiting her in Kansas!

Steff and her brother Jerry Ingle (84 years old) talked a few more times over the phone and sent some letters and photos back and forth. More faces to go with the names, and what a handsome family they were. Also by this time, another cousin, Connie Ingle had also contacted us both by phone.

A trip was in the works: Steff and Jerry wanted to meet. I wanted to go too, meet my new e-mail friend, as well as the other new relatives. May 3, 2001, about 9 months after our paper trail began leading to Kansas, we were there, touching down at the Kansas City Airport. Who would have believed we were there, after all the phone calls and e-mails, we’d arrived. We settled into our hotel, and Steff called her brother, Jerry, before we’d finished unpacking. They were ready and waiting for us the next day! It was almost too much to try and sleep, for the excitement of it all.

May 4, 2001, 9 a.m., and we were on Jerry’s doorstep in Raytown, Missouri. He welcomed Steff so warmly, introductions all around, his wife Helen, and then me, the traveling companion. We sat together for three hours, talking and sharing, questions asked and answered all around. Jerry shared mementos, photos and items which belonged to their father. 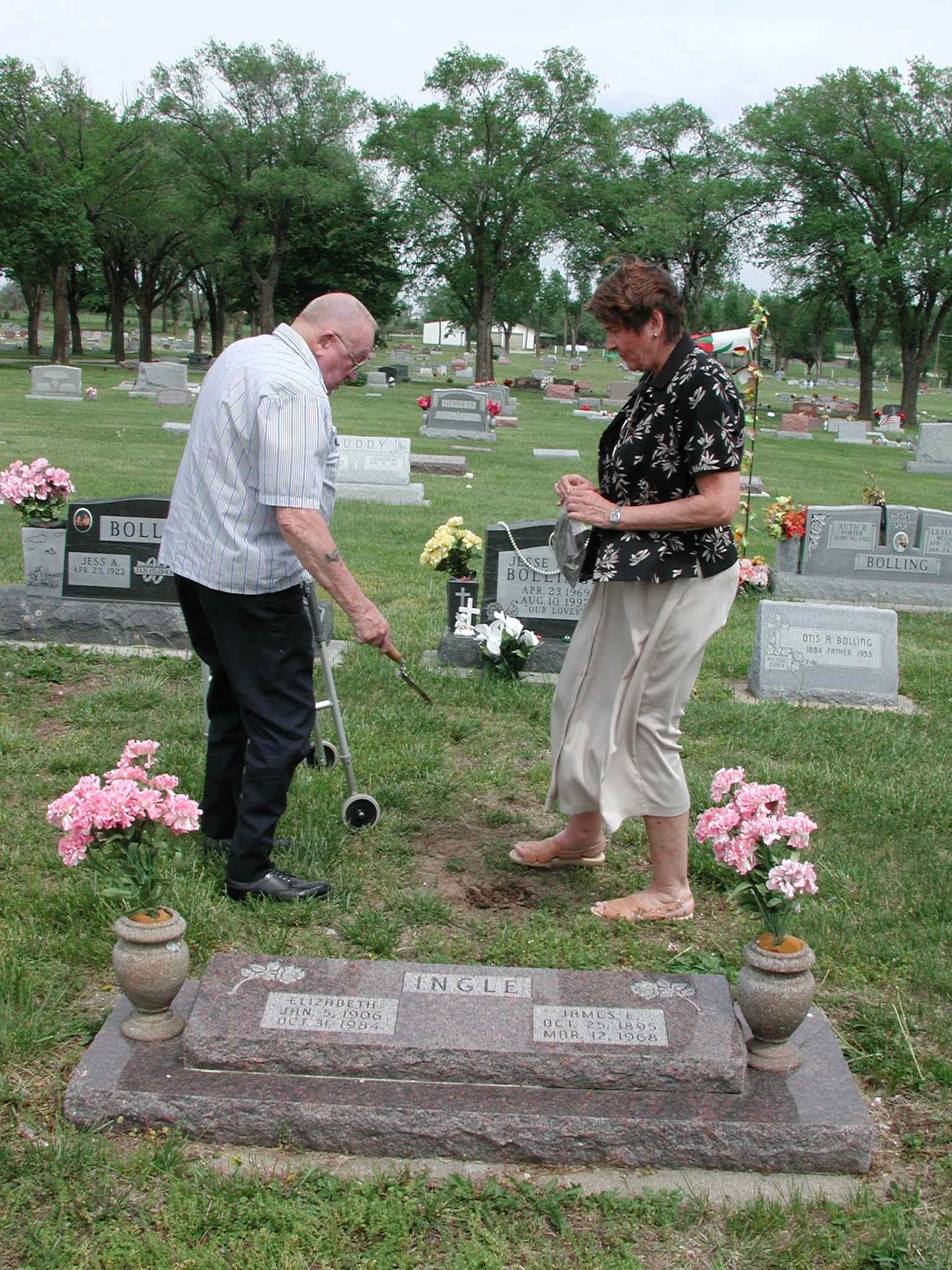 We had lunch and then took a trip over to Miami County to see Paola. Jerry was the navigator as I drove through the countryside. It was so beautiful, warm, and alternately raining. We California travelers loved every thing we saw along the way. We visited the cemetery, and saw James Ingle’s resting place, Steff’s father. It’s hard to explain the feeling, watching this, watching them, sharing this private time. Once again, we were seeing a place, which had only been words on a piece of paper. What an emotional day – overwhelming, adrenaline was flowing all day long. We felt like we’d been wrung out by dinnertime.

May 5, 2001, we set off to the eagerly awaited INGLE FAMILY REUNION! We drove to Lawrence, Kansas, wondering out loud, could or would this day be as great as the day before? We arrived to a wonderful and warm welcome from our hostess, Connie Ingle. Arriving to meet the cousins we’d heard about, e-mailed to some, written to others. All descendants share the same great-grandfather, Charles Wesley Ingle. And all too soon our afternoon wound down, the cousins said goodbye, promises to keep in touch, as well as a good dose of amazement! How had we managed to do all of this? Did we really manage a family reunion using the Internet? Well, yes, yes we had done just that… 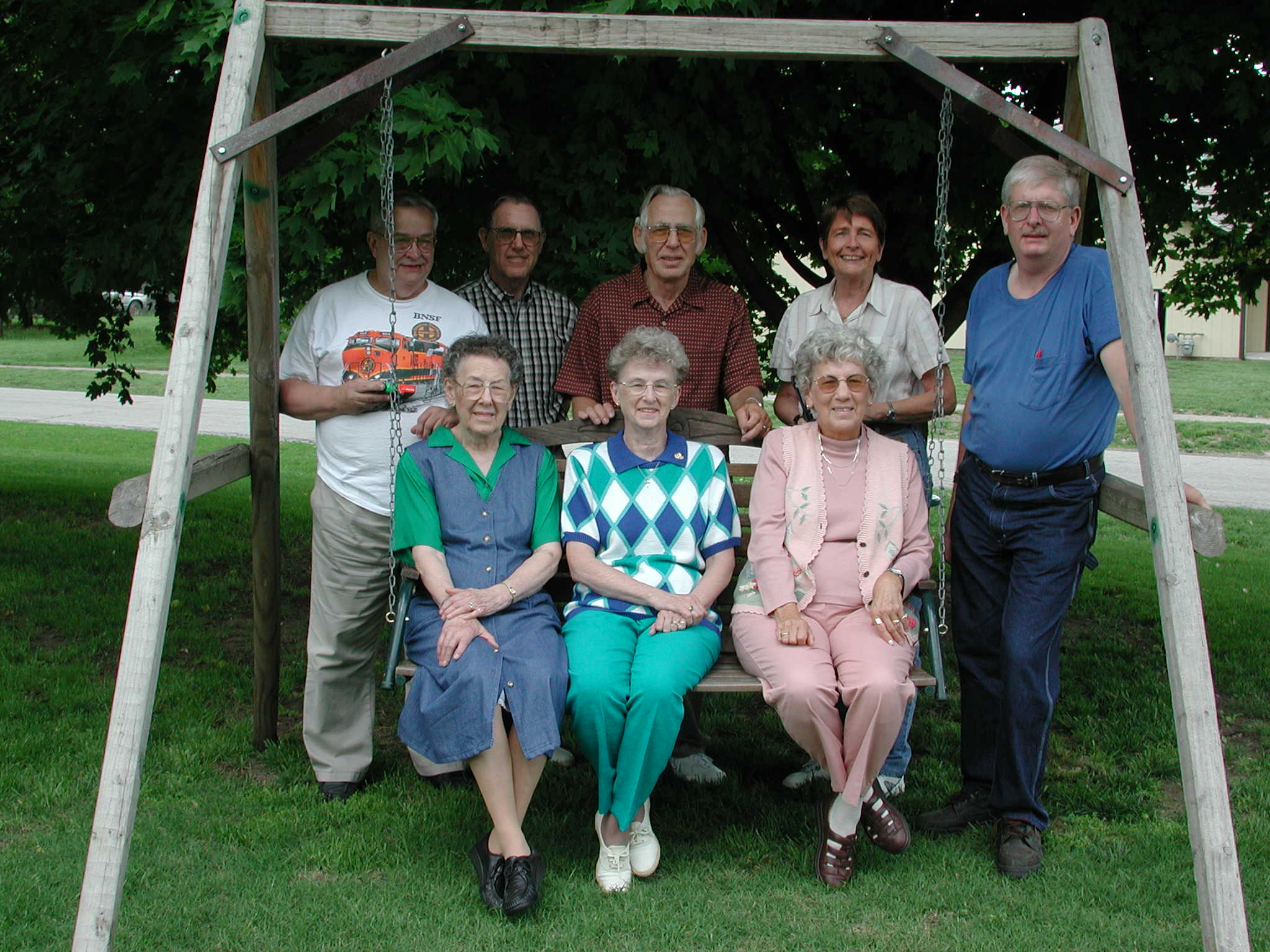 Elsa Buchanok - What a journey Linda! Beautiful and amazing! Thank you for sharing!